The Membean Adaptive Reinforcement Engine handles your practice routine so you don’t have to worry about knowing when to study. It adapts to your individual learning style and knows when a practice will do your memory the most good. You’ll see each word just enough times to know it cold. By taking guesswork and pain out of practice, you’ll have more time to learn your words and remember them longer. Membean makes your practice smart and highly efficient.
Learn how » 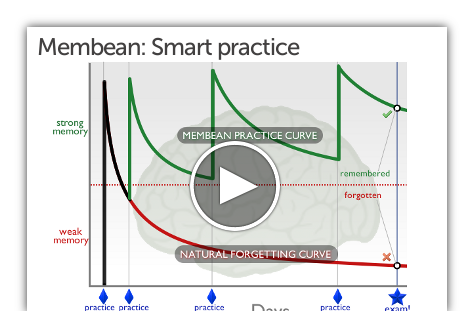 There are many causes of recall failure — Membean addresses all of them.

Failure to transfer into long-term memory

If no learning happens, there’s nothing to remember. Learning involves transferring new information into your long-term memory store. Many things can go wrong during this transfer.

Failure to retrieve from long-term memory

Although a word is in long-term memory it can still be hard to retrieve it. It’s like trying to find a friend at a very crowded party. You know she’s there somewhere but you just can’t find her.